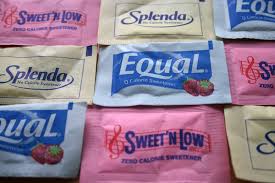 Diabetes is on the rise the world over. Just about anybody can become a diabetic whether you are rich or poor or a male or female or whether your parents are diabetic or not. It is largely attributed to the disordered lifestyle habits and increased stress levels in day to day life that has caused this to blow out of proportion.

People turn to shortcuts such as the great number of diets available each one claiming superiority over the others, a great number of holistic medications or alternate medicines and of course, sugar free substitutes. It has taken the markets by storm and you have so many available in the market today which has been incorporated into carbonated soft drinks, chewing gums, baked goods, cakes, fruit juices, candies, ice cream and even yogurt.

There are natural sweeteners such as Agave nectar, date sugar, fruit juice concentrate, honey, maple syrup and molasses which are available in the market.

The artificial sweeteners are always artificial though some products such as those containing stevia are claiming themselves to be natural. But it has to be either refined or processed to be marketed. These are intensely sweet and are many times sweeter than natural sugar. All the sweeteners leave an aftertaste.

There are different types of sweeteners such as :

Some of the sweeteners can be used for either baking or cooking as well. These can come in different forms such as tablets, or sachets containing powder or in liquid forms.

Sugar alcohols do not contain alcohol and do not contain ethanol which is seen in alcoholic drinks. These are naturally seen in certain vegetables and fruits, but can also be manufactured. These help to increase the bulk and improve texture when added during cooking or baking. These are seen in toothpastes, mouthwashes, chewing gums, frozen desserts, fruit spreads and chocolate. It is labeled as Xylitol or sugar alcohol in the nutrition labels.

When consumed in large quantities the use of sugar alcohols can cause a bloated up feeling, loose stools and abdominal fullness

I have seen many people who had a craving for sweets after consumption of the artificial sweeteners which in turn, causes the sugar levels to fluctuate. This in turn, leads to an increase in either the doses of medicines or injectables with the hope to control sugar levels. Just being off the artificial sweeteners bring about so many changes and reduces the cravings as well.

Some of the common brands available in the market are:

How sweet are these artificial sweeteners?

When artificial sweeteners are used there are some health concerns to be careful of- these can attribute to weight gain, tooth decay, probable increase in incidence of diabetes, cancer and troublesome numbness of the hands and feet, muscle spasms, giddiness and cramps. Generally people who are diabetic or those at risk to develop diabetes tend to rely more on ingestion of the so called sugar free containing food items. Besides having a lot of artificial sweeteners, the rest of the ingredients are the same which do add to the calories. Also it is worth bearing in mind that the taste has to be modified to enhance the flavor and also help it being sold off the racks at the supermarkets. The enhancement of flavor is done with the help of adding more hydrogenated oils or butter or fats which leave an excellent buttery taste and can help increase cholesterol levels !!!! People in this mad frenzy, tend to overeat their portions because of the false security given by the artificial sweeteners.

Being a diabetic does not mean you should be off sugar in totality. Your body needs a balance of sugar, salt, fats, carbohydrates, proteins and fat to make a complete meal which can be taken as small frequent meals to prevent cravings later on. Combine this with adequate physical activity and all will be well.

The solution to sugar needs:

You can substitute the white sugar with brown sugar or cane sugar which is the unrefined version of sugar. It is extremely hygroscopic and hence absorbs water from the atmosphere once the cover if opened. Store this in air tight containers. Roughly 3 spoons of brown sugar equals one spoon of white sugar.

Remember that people of the previous generation did not rely on artificial sweeteners.