It is of a major concern that the increased consumption of sugar sweetened beverages has been linked to the development of the dangerous chronic illnesses such as diabetes type 2, hypertension and coronary heart disease.

The increased consumption has been a potential contributor to the pandemic of obesity.

Unlike carbohydrates which have a high fiber content, the sugar sweetened beverages are nutrient poor and are often accompanied by intake of salty fast food as well. High levels of fructose corn syrup promote insulin resistance as well as fatty liver which can lead on to diabetes type 2.

The pictures given below show the amount of sugar in some of the commonly used things. It is eye popping. Out here in the Middle East, Coca Cola and Mountain Dew are considered like the national drinks and no party is complete without a similar beverage. 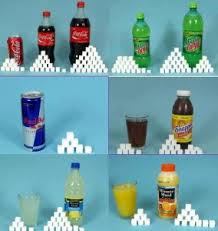